A man receives his second dose of the Covid-19 vaccine at the Central Plaza in Lat Phrao on Tuesday. (Photo: Arnun Chonmahatrakool)

There have been 11,140 new cases of Covid-19 and 116 additional deaths recorded in the past 24 hours, the Department of Public Health reported on Friday morning.

There were 11,068 cases in the general population and 72 among inmates.

On Thursday, 9,933 Covid-19 patients were discharged from hospitals after recovering from the coronavirus.

The Center for Covid-19 Situation Administration (CCSA) said on Friday afternoon that Bangkok again had the most new infections, with 1,255 cases, while four southern border provinces had 1,212 combined cases, led by Yala with 776.

Dr Chawetsan Namwat, director of the office of health risks and emergency diseases, told the CCSA briefing that the increase in the number of cases in Yala, Pattani, Narathiwat and Songkhla remained a major concern.

General Supot Malaniyom, who is in charge of CCSA’s day-to-day operations, said earlier on Friday that the Covid-19 task force was considering more lockdown measures in the four southernmost provinces to contain the spread of the virus.

TThe plan would be presented for a CCSA meeting chaired by Prime Minister Prayut Chan-o-cha on Thursday, said Gen Supot, who is also the secretary general of the National Security Council.

The CCSA said there were 16 new cases imported from eight countries, including four from Cambodia and three from Myanmar. Bangkok recorded the most new deaths, with 28, followed by eight in Samut Prakan. 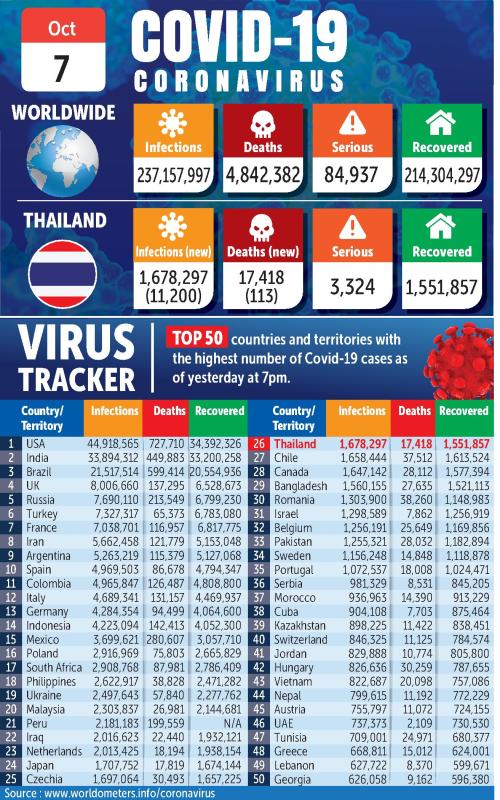